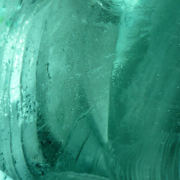 Making a critical point about glass

Glasses are often thought of as frozen liquids without long-range order. Albert et al. used fifth-order dielectric susceptibility measurements to show that the real reason behind the stiffness of glass is more complicated. Measuring the response of two traditional glass formers to very high electric fields is challenging, but reveals the growth of compact domains across the glass transition. The emerging amorphous order is only weakly dependent on the specific molecular properties, suggesting a more universal governing behavior for making glasses.

Glasses are ubiquitous in daily life and technology. However, the microscopic mechanisms generating this state of matter remain subject to debate: Glasses are considered either as merely hyperviscous liquids or as resulting from a genuine thermodynamic phase transition toward a rigid state. We show that third- and fifth-order susceptibilities provide a definite answer to this long-standing controversy. Performing the corresponding high-precision nonlinear dielectric experiments for supercooled glycerol and propylene carbonate, we find strong support for theories based on thermodynamic amorphous order. Moreover, when lowering temperature, we find that the growing transient domains are compact—that is, their fractal dimension df = 3. The glass transition may thus represent a class of critical phenomena different from canonical second-order phase transitions for which df < 3.