The field of morphogenetic engineering has been founded at ISC-PIF by René Doursat. It is the first initiative of its kind to establish a new trend of research exploring the modeling and implementation of “self-architecturing” systems. It focuses on the programmability of self-assembling agents, which is often underappreciated in complex systems science—while, conversely, the benefits of self-organization are often underappreciated in systems engineering.

Classical engineered products (mechanical, electrical, computer, civil) are generally made of a number of unique, heterogeneous components assembled in very precise and complicated ways. They are expected to work as deterministically as possible following the specifications given by their designers. By contrast, self-organization in natural systems (physical, biological, ecological, social) often relies on myriads of identical agents and essentially stochastic dynamics. Here, collective behavior and nontrivial patterns can emerge from relatively simple agent rules—a fact often touted as the hallmark of complex systems. Yet, the great majority of these naturally emergent motifs (spots, stripes, waves, clusters, and so on) are random and modified only by boundary conditions. They can be described with a few statistical variables, such as order parameters, but do not exhibit an intrinsic architecture like machines and industrial systems do.

Important exceptions to this dichotomy can be found in certain types of biological systems, which distinguish themselves by their strong “morphogenetic” properties and demonstrate the possibility of combining pure self-organization and sophisticated architecture. Multicellular organisms are composed of organs and appendages arranged in specific ways, yet, they entirely self-assemble in a decentralized fashion under the guidance of (epi)genetic information produced by millions of years of evolution and stored inside each cell. Similarly, termites, ants or wasps are able to collectively build extremely complicated and well organized nests without the need for an overall plan or grand architect.

In other words, these examples testify to the existence of “architectures without architects” or programmable self-organization—a concept not sufficiently explored so far, neither in complex systems science (for the “programmable” part), nor in traditional engineering (for the “self-organization” part). These natural examples trigger whole new questions: How do biological organisms or populations achieve morphogenetic tasks so reliably? Can we export their self-formation capabilities to engineered systems? What would be the principles and best practices to create such morphogenetic systems?

To meet these challenges, the Morphogenetic Engineering book that René Doursat co-edited with Hiroki Sayama and Olivier Michel establishes a new field of research that explores the artificial design and implementation of autonomous systems capable of developing complex, heterogeneous morphologies and functions without central planning or external drive. Particular emphasis is set on the mutual relationship between programmability/controllability and self-organization. Its many potential applications in artificial systems (or hybrid “techno-natural” systems) include self-assembling robots, self-coding software, self-constructing buildings, self-reconfiguring production lines, or self-managing energy grids, all based on a multitude of components, modules, software agents and/or human users building their own network solely on the basis of local rules and peer-to-peer interactions. Decentralized automation relying on emergent architectures promises to be the new paradigm for a future science of “complex systems engineering”.

The spontaneous making of an entire organism from a single cell is the epitome of a self-organizing and programmable complex system. Through a precise spatiotemporal interplay of genetic switches and chemical gradients, an elaborate form is created without explicit architectural plan or engineering. Embryomorphic engineering, a methodology Rene Doursat created, proposes a multi-agent abstraction of these fundamental morphogenetic mechanisms toward artificial systems. 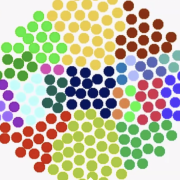 In this work, carried out by Rene Doursat’s PhD student Carlos Sánchez under the co-supervision of Taras Kowaliw, development follows the same principles as the precursor 2D EMBENG model—self-assembly by elastic forces, pattern formation by gradient propagation and gene expression. In addition here, developed organisms can generate movement by contracting adhesion links between “muscle” cells, while other cells have differentiated into “bones” and “joints” to support and articulate the body’s structure. 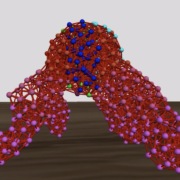