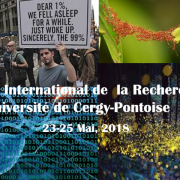 David Chavalarias Keynote at the conference Transversal problems in complexity

We wil show how to qualify and quantify the activity of political communities in a multi-polar political environment as well as their temporal evolution through the study of their digital traces.

From the analysis of a corpora of 60 million Twitter exchanges between more than 2.4 million users who interacted with French political figures during the 2017 French presidential elections, we characterize the socio-semantic networks of the French political environment, as well as their development over a period of eleven months preceding the election.

This reconstruction provides unprecedented insight into the opinion dynamics and the reconfigurations of political communities, giving access to an intermediate level of resolution, between traditional sociological surveys and large statistical studies (such as those conducted by national or international organizations)

We will show how how this type of reconstruction,  that are intended to constitute input for social systems modeling, can gives insights into some important societal issues.

Want to join the discussion?
Feel free to contribute!