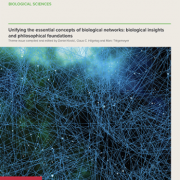 A few billion years have passed since the first life forms appeared. Since then, life has continued to forge complex associations between the different emergent levels of interconnection it forms. The advances of recent decades in molecular chemistry and theoretical biology, which have embraced complex systems approaches, now make it possible to conceptualize the questions of the origins of life and its increasing complexity from three complementary notions of closure: processes closure, autocatalytic closure and constraints closure. Developed in the wake of the second-order cybernetics, this triple closure approach, that relies on graph theory and complex networks science, sketch a paradigm where it is possible to go up the physical levels of organization of matter, from physics to biology and society, without resorting to strong reductionism. The phenomenon of life is conceived as the contingent complexification of the organization of matter, until the emergence of life forms, defined as a network of auto-catalytic process networks, organized in a multi-level manner. This approach of living systems, initiated by Maturana & Varela and Kauffman, inevitably leads to a reflection on the nature of cognition; and in the face of the deep changes that affected humanity as a complex systems, on the nature of cultural evolution. Faced with the major challenges that humanity will have to address in the decades to come, this new paradigm invites us to change our conception of causality by shifting our attention from state change to process change and to abandon a widespread notion of ‘local’ causality in favour of complex systems thinking. It also highlights the importance of a better understanding of the influence of social networks, recommendation systems and artificial intelligence on our future collective dynamics and social cognition processes.