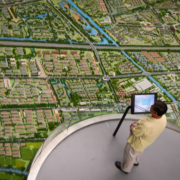 This chapter is about Complexity and Spatial Dynamics in Urban Systems. Strong inequalities in the size of cities and the apparent difficulty of limiting their growth raise practical issues for spatial planning. At a time when new constraints in terms of limited energy and raw material resources or possible catastrophic events such as pandemics are challenging further urban expansion, it is important to consolidate the theories from various scientific disciplines to estimate to what extent the urban dynamics can be modified. While briefly reviewing the contributions to urban theories provided by the new developments in complexity sciences, we first advocate for the soundness of urban theories. Second, we develop our original approach considering spatial interaction and evolutionary path dependence as major features in the general behavior of urban entities. Third, we test these principles grounded in an evolutionary theory of urban systems by experimenting four dynamic models of urban growth calibrated on harmonized empirical data sets with comparisons across the whole world.